Could Kik be the new app to rival WhatsApp and Facebook Messenger?

Kik is a messaging app that was founded in 2010 by then university student Ted Livingston. His goal was to:

Now more than 10+ years later, Kik has been gaining loads of traction.

These 2022 statistics about Kik users will tell you everything you need to know about the messaging application and its users.

Let’s Break Down The Number Of Kik Users…

Kik’s user base has been growing at a rapid pace since the day it launched.

By rapid, I mean Kik’s users had grown to over 1 million in just over 2 weeks after launch. Here’s what the number of users looks like today.

Kik now sits at just over 300 million registered users worldwide. They have managed to get more and more people using their platform due to the big focus on data privacy. 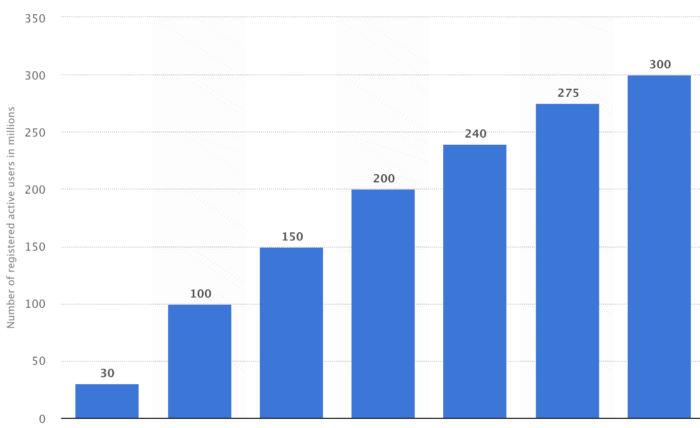 Although Kik has a long way to go to catch up to messaging giants like Facebook Messenger and WhatsApp, their steady growth has been impressive.

While registered users are important – monthly active users tell the story about how much people actually use a platform. 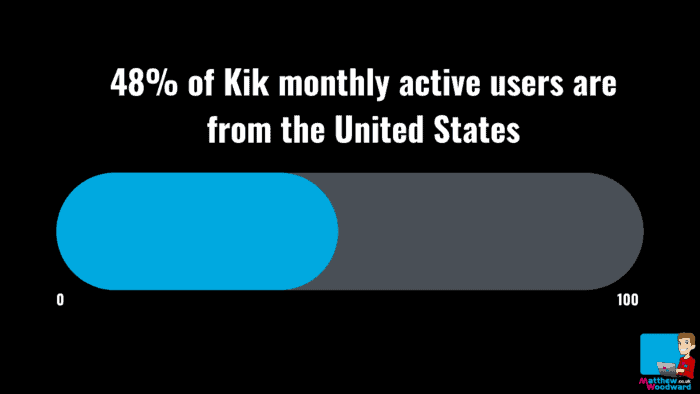 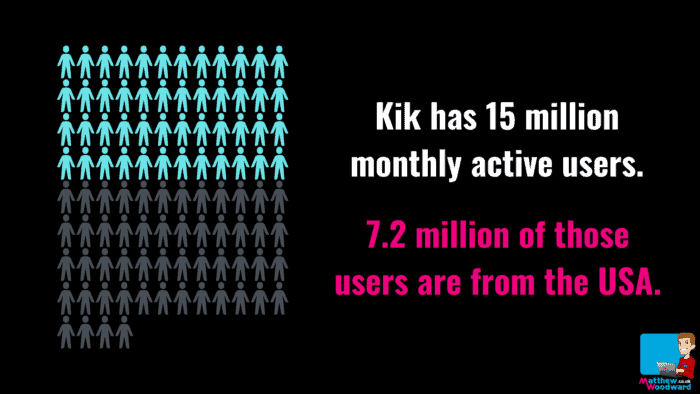 From the very beginning, Kik has been most popular within the US market.

Kik’s growth in people logging into the app every day has been attributed to people making it their number one messaging platform. 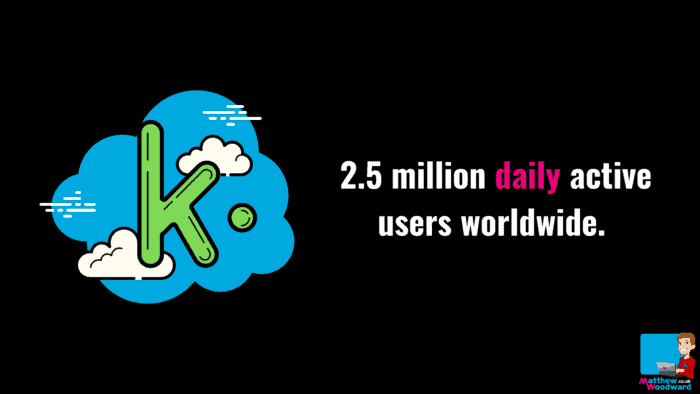 These users have all but abandoned other messaging apps.

Who Are The Kik Users?

Kik is picking up a large loyal following and its growth is undeniable.

But who exactly are the Kik users?

Kik is definitely more popular with younger people. 70% of Kik users are aged between 13 and 24 years old.

Kik is specifically popular among teenagers in the US, with over a third (⅓) of all American teens actively using Kik to message friends.

As if that’s not enough…

Kik is now the choice of messaging platform for US teens to connect with:

Large brands such as Shopify and Sephora are already taking advantage of this to increase engagement and sales with teens.

More on this later.

Countries With The Most Kik Users

It’s no secret that Kik has found its home with US users.

Although Kik was initially founded in Canada, it was quickly adopted by the United States. Kik has been ranked in the top 10 of all apps for teens in the US.

Kik is now the 8th most popular mobile messaging app in the United States as of September 2019 when ranked by monthly active users. 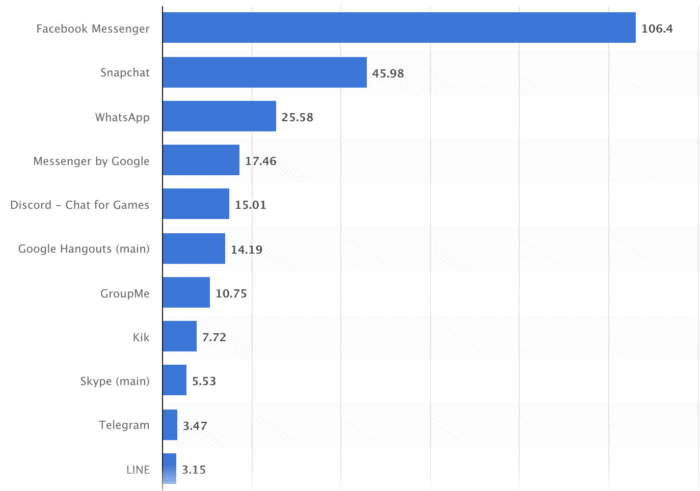 It has even climbed into 11th place for the most popular mobile social networking apps in the US when ranked by average session duration. 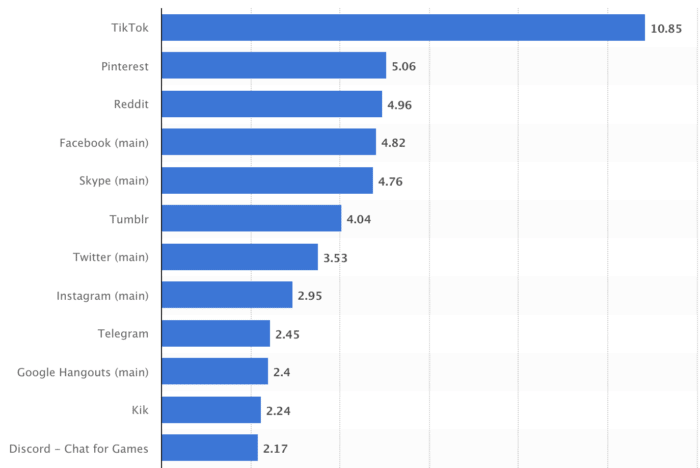 Not bad results at all.

What Do Kik Users Send Through Kik Messenger App? 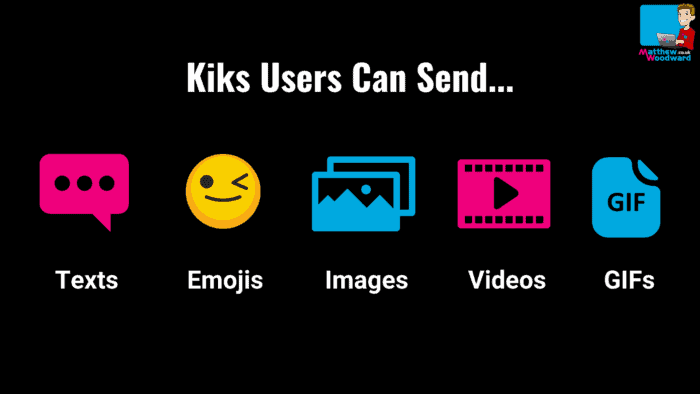 As a majority of its users are teenagers – you can’t just have good ole text messages to keep these teens satisfied. That means that not only are text messages being sent but…

…Are all part of the Kik messaging experience.

Here’s what the stats say.

Maybe that’s why Kik users send over 6 billion emojis over the messaging platform every single day.

That’s a lot of emotions being thrown around.

The number #1 function of any messaging platform is to communicate through text.

Kik users send over 5 million text messages to each other every day.

We do know it is a big part of Kik. Especially for teenagers.

Many users say that they regularly send photos and videos through Kik. Funny memes and GIFs have also become very popular.

What Do Kik Users Use Kik For?

While it’s the main usage, Kik isn’t just about text messaging friends – it’s about so much more. Here are a few popular uses for Kik. 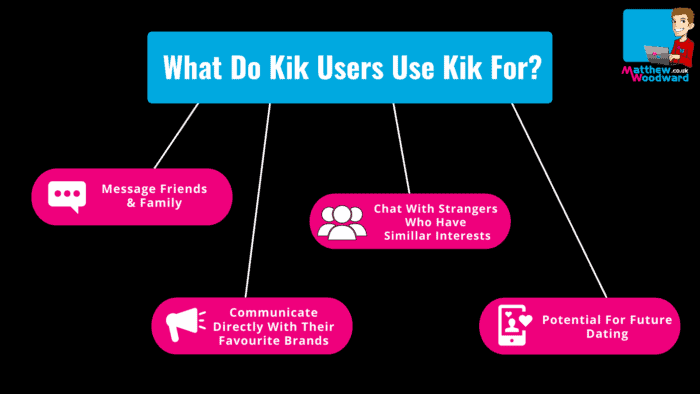 This is pretty obvious. Kik is primarily used by users to message their friends.

But let’s be real for a moment… There is certainly no shortage of free messaging apps available to message your friends.

One of the big reasons Kik is so popular is you only need an email address to sign up. There is no need for any other identification making it very easy to sign up and get involved. 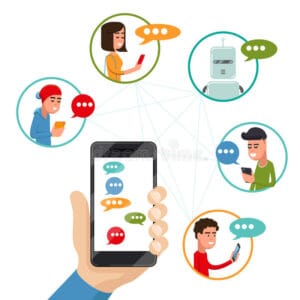 Within a couple of minutes, you can be registered and chat with friends with the confidence of complete privacy.

Communicate Directly With Their Favourite Brands

The younger market is often more challenging to reach.

And this is where Kik comes to play. Kik provides an opportunity for brands to engage with their younger audiences. And they love it!

Kik users can message their favourite brands directly through the app. Brands have been taking advantage of this by providing services such as:

And so much more.

Some brands are even integrating checkout systems so users can easily purchase products friends share with them.

When you first sign up for Kik you get a message from the Kik team.

This message provides you with an opportunity to explore public groups which are based on different interests. If you find a group that you want to be involved in, it is easy to join the conversation.

Meet someone you want to continue the conversation with?

You can message anyone you meet – privately. If they accept your message, you can continue to chat with them.

Now, this feature is not necessarily unique. Facebook Messenger for example allows you to do the same thing.

The difference is how seamless the chat features are and how quickly you can connect with people while staying completely anonymous.

Kik has another growing user base amongst 18-24-year-olds. And it has been suggested that Kik can be used by this age group for dating. 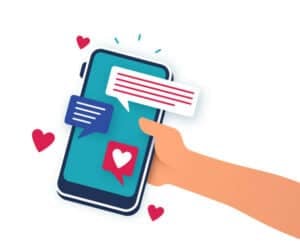 Apps like Tinder push you to judge someone based on just a few pictures and a short bio. Kik gives you the chance to join groups and meet like-minded people.

This means you can connect with people who have similar interests to you.

How Much Time Do Kik Users Spend On The App?

So you can see that Kik is a popular app with lots of different ways to connect with friends and even strangers.

But how much time do people spend using Kik?

Most teens spend an average of 2,200 minutes per month on Kik. 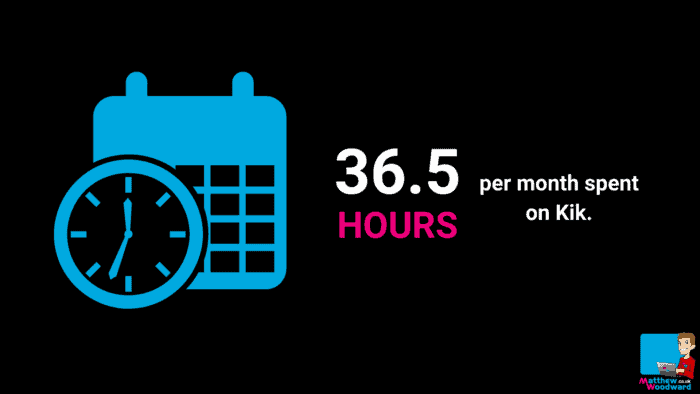 That comes out to be about 36.5 hours per month spent using Kik for messaging alone.

The average user spends about 1 hour a day on Kik. Teens spend a bit more time with an average total of 74 minutes per day on the app. 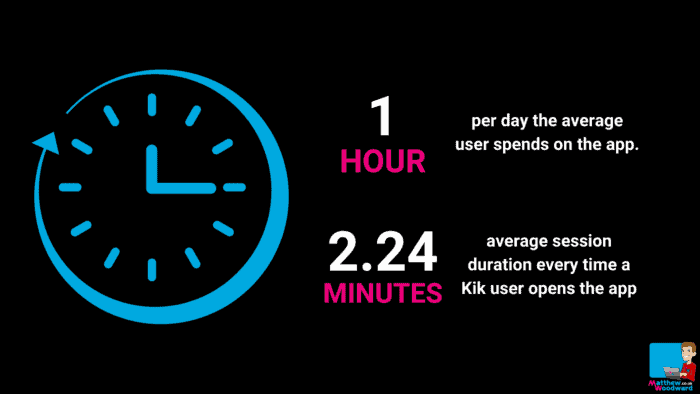 As the user base of Kik continues to grow, they expect that average time per day to go up even more.

The average session duration every time a Kik user opens the app is about 2 minutes 24 seconds.

Facts To Know Before Including Kik In Your Marketing Strategy

So it’s clear that Kik has a growing user base that is highly engaged and using the app regularly.

But can Kik be used for businesses?

There have been a number of big and small brands that have incorporated Kik into their overall marketing strategy.

Here’s what you need to know to see if Kik is a good platform for your own marketing.

This is a pretty big deal.

Within just 15 days of its release, Kik reached over 1 million user registrations. Why was it so popular?

Kik goes well beyond the normal user privacy features of other apps. That even includes other paid messaging apps.

This has been very attractive to a wide range of people and specifically teens.

Numerous Rounds of Investment In The App Through The Years

Kik doesn’t just have a solid user base.

Companies from all over the world have invested millions of dollars into the app over the last 10 years.

This has helped Kik maintain a very strong messaging app and continue its growth since its 2010 beginning.

It hasn’t all been smooth sailing for Kik.

In 2019 about 9 years after its creation, Kik’s CEO announced that the application would be shut down on 19 October 2019.

But just a few weeks before the shutdown date, US Company MediaLab stepped in to save the day. They bought Kik for an undisclosed amount and took over all of the operations.

Here’s why that is important:

MediaLab is well known for purchasing quality apps and taking them to new heights.

They also have the resources and technology to continuously improve Kik. Within weeks of buying Kik, the app received a number of updates and patches to improve the overall user experience.

All of this sounds great, but the question is…

Today the Kik app gets more than 1 million downloads each month. 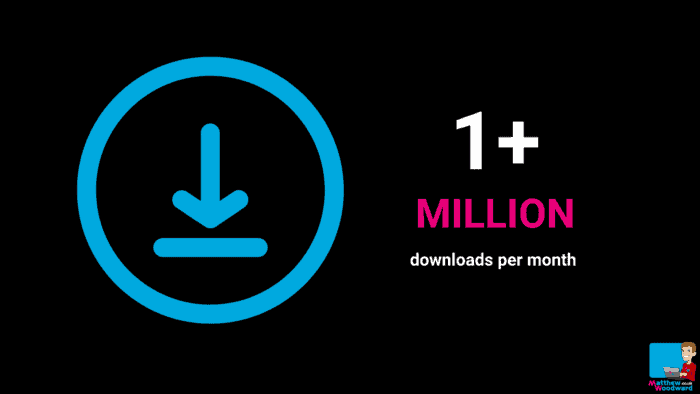 Kik has proved itself to be a great app and has a very high retention rate.

Teenagers & Young Adults: The Best Markets To Target With Kik

Thinking Kik could be good for your business?

You’d be right if your ideal customers are teens and young adults. Kik’s biggest and most active users are aged 13-24 years old.

This age group represents around 70% of all active users on the app. 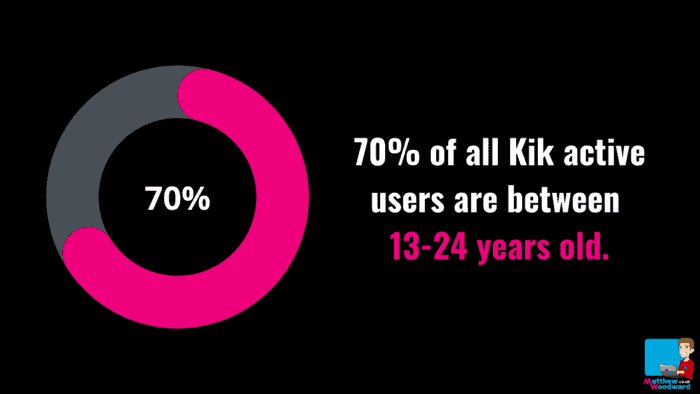 If you are looking to expand your business into this age group and engage with them, Kik could be the channel to do it.

Selling in the US?

With almost 40% of all young Americans actively using Kik, it also offers a great opportunity to engage and nurture this market.

How Brands Use Kik To Reach Teens And Increase Engagement & Purchase

Some brands have already started incorporating Kik successfully into their marketing.

Here’s how they do it.

Shopify had been looking for a way to introduce teens to their list of store owners and the products they sell.

They wanted to make something that not only increased sales for their store owners but was also fun and engaging.

They came up with a Kik messenger bot that helps teenagers find the perfect gift for friends and family:

Sephora was one of the first big brands to use Kik.

Sephora’s primary strategy has been to share content from its own brand and from influencers around beauty.

They used Kik as a way to promote content, including:

They have been very successful in fostering authentic engagements from a primarily teen based audience.

One of their most successful marketing campaigns was their “Prom campaign”.

The campaign was specifically targeted at driving engagement around beauty around Prom night.

They were able to engage thousands of users and position their beauty products as the choice for Prom night.

Read more about the Kik and Sephora Prom case study.

Kik is a fast-growing messaging application that is expected to rival even the bigger messenger apps in the coming years.

Clearly, it has a highly engaged user base that is very loyal. But is it worth investing in?

While the younger audience is harder to reach, Kik gives businesses an opportunity to:

There are quite a few small and big brands already successfully doing this.

If your business is looking for a new channel to reach a younger audience, Kik could be well worth the look.