I first learned how to start an online business 16 years ago and the thrill never gets old.

Some I have started or purchased have been amazing successes and some have been total failures.

And when I say new I mean brand new. There was no email list to pitch to, no following, just a brand new website starting from absolute zero.

My name is Adam White.

I run Prosperly, where I teach about buying undervalued websites and flipping them.

Also for fun I took two years off and went and wrote and directed a feature film.

How To Start An Online Business With An Idea

When you are looking to start a business online, you need to come up with an idea that solves a problem. From that point, you can work on how to get started.

I work in the SEO world and am always looking for ways to make the SEO process easier.

One of the main strategies I use to do SEO both for myself and for clients is to do authority guest blogging.

I won’t go into the many benefits of guest blogging here (one of which is link building), but I will explain a little later how I used it to drive targeted traffic and sales to my new website.

As I was doing SEO for many websites I kept trying to find an updated list of blogs where I could submit a guest post.

There are several blog owners who took the time to put together extensive lists, but as I went through the guest blogging sites, I noticed that about half of the blogs on these lists no longer accepted guest posts.

I wasted a lot of time and energy trying to verify hundreds of blogs.

It got old really fast.

Every day the list grew until eventually, I had a list of hundreds of blogs that would accept guest posts today.

The list became very valuable to me and then I showed it to some of my SEO friends and they started begging me to use it as well.

I knew I had something that would help anyone interested in doing SEO but as the list got bigger and bigger, it became more difficult to keep track of which sites I had actually submitted to.

I decided to take the list and build some online software to manage it.

I called a friend who was a programmer and within a couple of weeks we had built GuestPostTracker.com.

How The Business Makes Money

Even though there were free lists out there, they were outdated and a big time waster.

I decided that I would keep the list updated but people would have to pay a small monthly fee to have access.

They would also get access to the submission tracking software that tracks:

Again, this was something I needed as I was doing SEO for my clients.

How I Got Targeted Traffic To My New Business

One of my SEO friends who was an early tester on the site loved it so much he decided to write a guest post about Guest Post Tracker as a new SEO tool people should try.

As soon as the guest post went live I started getting targeted traffic right away and people immediately started signing up. My new business was already getting traffic from one guest post.

I was really shocked to see the website performing that well.

Here is how I set up the sales page:

I decided to go with a 1 plan option to keep things simple and it seemed to work really well.

I knew that I needed to try to repeat this strategy again.

I contacted my SEO friend and asked him if he wouldn’t mind doing another guest post on a different site that talked about Guest Post Tracker.

He agreed and when the new post went live it was the same result; Another small flood of traffic and more sign-ups.

It was proof for me that my new internet business was going to be something people would use.

The guest posting was a great way to get small bursts of traffic to the site but I wanted something more consistent.

I realized that if I had a constant flow of targeted traffic,  I would make money.

My long term strategy with Guest Post Tracker was and is to get great Google rankings so I can get free targeted traffic all day long.

But I needed revenue in the meantime. I didn’t want to do PPC because my price point wasn’t high enough to justify it.

In many of the websites, I had built and run before I had been successful finding other industry-related websites to advertise on, which would send me very targeted traffic.

And that is when it hit me.

There were several blog posts that ranked all over Google for the phrases I was targeting, that had an outdated list of blogs that accepted guest posts.

What if I could advertise directly on those pages and steal some of their traffic.

Two of them got back to me and said they would do it.

The one caveat I had was that my ad needed to be in the body of the blog post, in the top introductory section. It needed to embedded as if it had been written by the blog owner as part of the post.

They both agreed and when we settled on a price they placed the ad and we were off.

This is what the ad placement looks like on one of the websites: 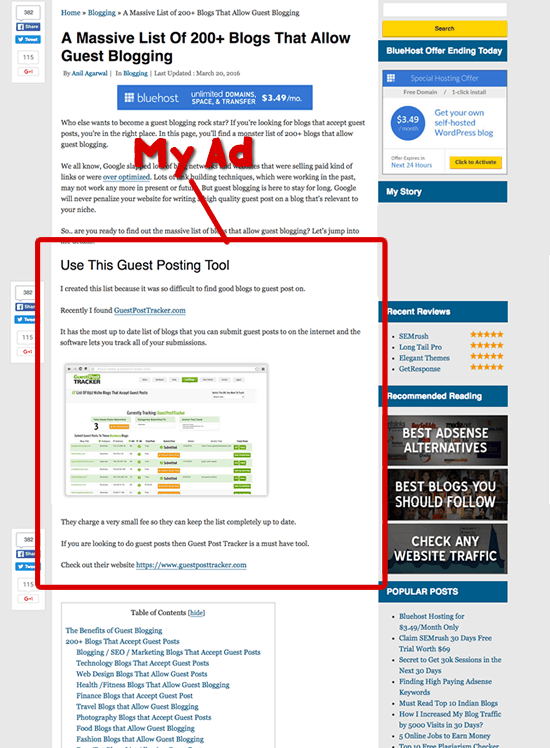 Between guest posts and these two websites, I started getting new signups every day.

All the while my Google rankings were slowly growing.

As much fun as it was to have one person after another signing up to pay a monthly fee to use my new website, I wanted to see if I could just charge a one-time fee for lifetime access.

I recognized that if I continued to build up a subscriber base then the revenue growth could be exponential.

But for me, money now was more appealing than potential money later.

I made the one-time fee a price I thought that would be greater than what a monthly subscriber would be worth.

I only made one change to the sales page (the price): 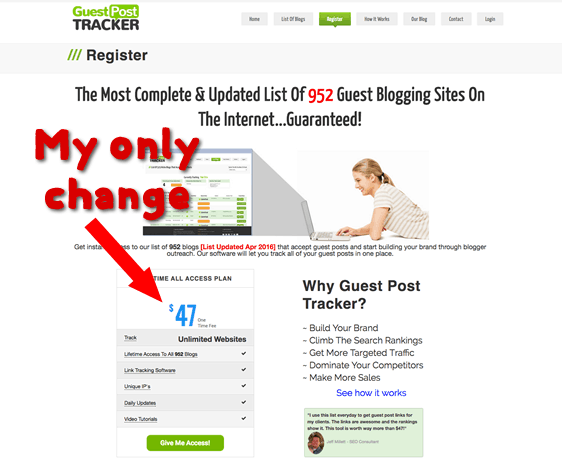 Once I started doing one-time fee pricing, the revenue started to jump dramatically.

Now it is a matter of driving more targeted traffic and finding the perfect price point that will maximize revenue.

It’s not just a matter of charging as much as possible.

I also want to grow my customer base so I have a strong base of people who know and trust me and will buy from me again when I launch any new amazing SEO software (hint, hint).

I have to say I have been really surprised at the quick success of Guest Post Tracker considering the lack of a following when I started.

It has taught me a couple of valuable lessons-

Now my main focuses on the site are to build the SEO and to tweak and test to increase conversions so that revenue will improve and the website will become a more valuable asset.

Do you think I made a mistake switching to a one-time fee for lifetime access?

What else can I do to drive up traffic and revenue? Matthew Note: you could make it an annual subscription

Let me know your thoughts in the comments.