Home > Blogging > Traffic > How To Find Influencers To Promote Your Content

Content promotion doesn’t have to be hard work. Especially when you know how to find influencers and get them to do all of the heavy lifting of content promotion for you.

It is really easy to do and if you have ever heard the saying work smarter not harder this tutorial is a prime example of that!

What You Will Learn

Have you ever written a post on your blog, hit the publish button and even though it might be the greatest piece of content ever written on the subject nobody shows up to read it?

I have done that more times than I can count at my blog.

In the blogging world, the old adage of “If you build it they will come” doesn’t hold true.

The general rule of thumb is to:

So you go out and start promoting the post like everyone tells you to.  You share your post on all of the big social networks, submit it to all of the curation sites and even email your own list (if you have one).

A small trickle of traffic comes in but nothing like the thousands of visitors leaving hundreds of comments and sharing the posts on your competitors’ sites.

How the heck are they getting so many engaged visitors to every single post that they publish?

Let me let you in on a little secret.

They aren’t driving all of that traffic themselves!  In fact, odds are the vast majority of the traffic that the top blogs in your niche are getting are from “influencers”.

These are people with very large audiences that can drive hundreds (even thousands) of visitors to your blog with just one tweet.

So how do we find these mythical influencers that can change our blogs lives with the click of a button?  We go to the source….

How To Find Influencers

The best way to find influencers in your niche is to start with the influencers who are promoting your competitors’ blog posts.  By identifying them we can contact them and convince them too promote our stuff, but first thing is first, we need to identify them.

Our first stop is a tool called Buzzsumo.  For those of you not familiar with Buzzsumo, it is an incredible tool that helps you to find influencers on Twitter using whatever keywords you like.

Let’s head over to Buzzsumo and search for a keyword that is related to a blog post you want to find influencers for. 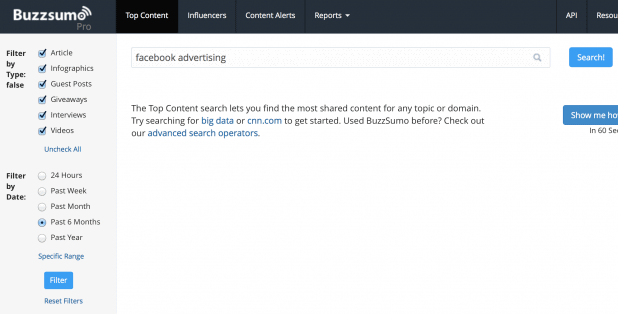 Set it to search for the past 6 months and hit the search button.

This will bring up a list of articles that have been highly shared relating to your keyword.  If the results seem to broad put quotes (example “Facebook advertising”) around your keyword to bring in only exact match results.  I have to do this often to get the best results.

Next sort the results by “Total Shares” this will bring up the top shared posts about your keyword.  You should recognize a lot of the domain names of the articles (they should be your competition!).

Let’s start at the top and work our way down.  Click on “View Sharers”, this will bring up a list of all the influencers who have shared the post. 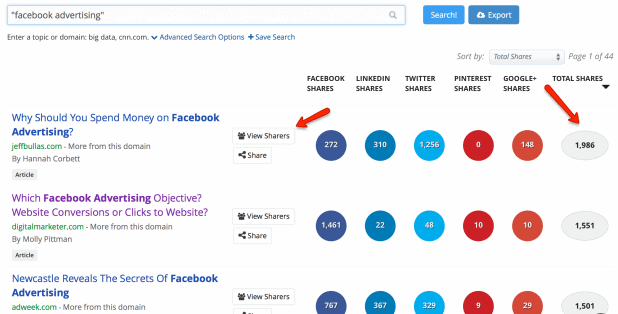 Next sort the results by “Reply Ratio”.  This is the percentage of how often they will respond to direct tweets on Twitter.  The higher the response rate the more likely they are too respond to your request to share your own post! 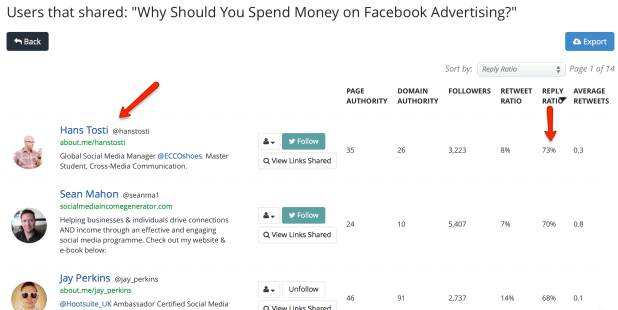 Open up an excel spreadsheet and start copying down influencers’ Names and Twitter IDs.  I usually grab everyone who has a 30% or more reply ratio.

Now hit the “Back” button and repeat this process for every post you see that is relevant to the post you are trying to find influencers for.

The last thing we are going to do on Buzzsumo is to grab all of the blog URL’s that have content and are being shared a lot.

So go back to the “content search” page (the page we originally got from searching for our keyword) and copy down all of the URL’s that you see.

We will be using these on the next site we are heading to.

Ps. If Buzzsumo isn’t to your taste you might want to check out a suitable BuzzSumo alternative.

We have the URLs of blogs in our niche that have been shared a lot, odds are there is other content (articles, listicles etc.) on their site that has been highly shared as well.  Let’s grab the influencers that have shared that content as well!

To do this we are going to use a tool call Quicksprout this is a free to use site created by Neil Patel.

Head over to Quicksprout and enter the first URL in your list that you pulled from Buzzsumo. 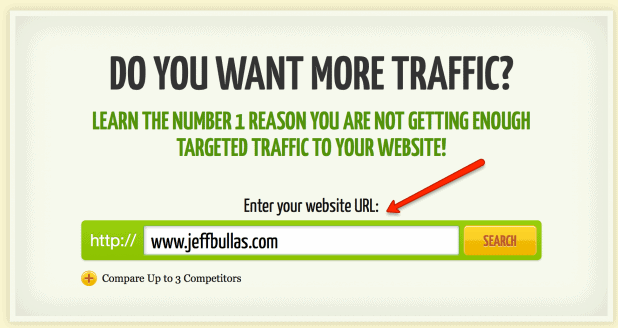 Once you click search Quicksprout goes out and analyzes all of the pages of the site and brings back some interesting statistics.  But what we are interested in is the “Social Media Analysis”, click on that tab and scroll down, it will look something like this. 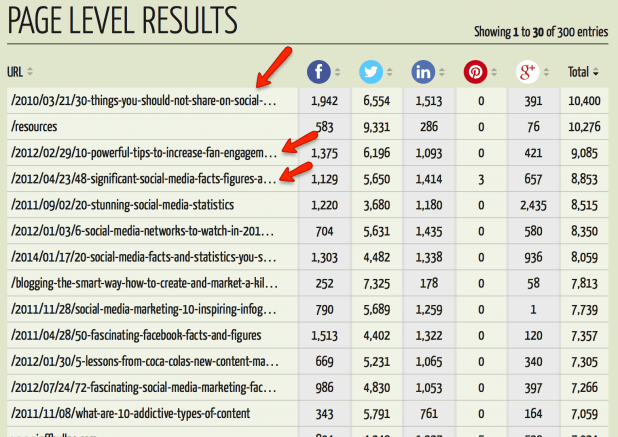 Open up a new excel spreadsheet and start copying and pasting all of the top shared URL’s.  Be sure to only grab the URL’s of blog posts and not the static pages such as “about me” or “resources”.

Next, we are going to check each of these links and grab the influencers who shared them.

Head over to Topsy and copy one of the URL’s you grabbed from Quicksprout into the search box.  Be sure to select “Influencers” above the search box before you hit enter.

This will bring up a list of all the people who have tweeted that URL.

We want to select only the tweets that are in English (assuming that’s your target audience) as well as click on the “Influential Only” tab.  This will only list the people that are influential and have a responsive audience.

Now in this example, I have over 775 influential influencers that have shared this post on Twitter.  That is a bit much for me, I don’t want to go through and manually contact 775 people!

So to narrow this down I only want to look at what Topsy calls “Highly Influential” people.  These are the people with large highly engaged audiences that can send a butt load of traffic your way.

Unfortunately Topsy does not give you a way to sort by “Highly Influential” people so you will just need to scroll through and look for the “Highly Influential Tag”.  As you do be sure to copy and paste the names and Twitter IDs into your ever-growing spreadsheet of influencers.

We have one more stop on our journey to identify influencers who can send a lot of traffic our way.

Most of you are probably already familiar with bit.ly.  It is a link shortening service (and one of the most popular out there).

What most of you probably don’t know is you are able to look at the statistics of any link that has been shortened in bit.ly and see exactly who shared it along with how many clicks they have sent!

Head over to bit.ly and paste a URL into the box.

This not only brings up the stats for the shortened link you just created but for anyone who has used bit.ly to shorten the same URL.

Scroll down to the bottom of the page and you will see the top 6 people who drove the most of the amount of clicks to this URL!

If we click on any of these people it will actually give us a ton more info on the clicks that they sent.  Including where they shared the URL, what countries that the clicks came from ect.

For our purposes, we are interested in seeing where they shared the URL and how many clicks came from each source so go ahead and click one of the influencers.

As you can see here, this influencer shared the link of Facebook driving 48 clicks and then more than likely emailed it out to her list which results in a staggering 756 clicks.

Odds are you aren’t going to get someone to email your link to their list (unless you pay for it) so focus mainly on the social network shares.

48 isn’t too shabby, let’s take a look at another influencer.

This influencer shared the link twice on Twitter resulting in 34 clicks, plus a share on Google+ that brought in 8 clicks.

So as you can see this is a great way to see exactly who is sharing what on what social networks and if it would be worth your time to contact them to convince them to share your content!

Alright, we have built a massive list of influencers that have already promoted content that is similar to ours, now how do we approach them to convince them to share ours as well?

There are two different ways that you can contact these influencers to introduce them to your content.

The first is by email.  Email them and say something along the lines of:

I have a similar post on “Title” that “Argues the same point/shows it from a new perspective/whatever”.

Thought you would enjoy it :)

@InfluencerName saw your share of “INSERT LINK HERE” and really enjoyed it.  It inspired me to write a similar post here: YOUR LINK HERE.  I know you’ll enjoy the read!

You will have to adjust it for length to be able to send it by tweet but you get the jist.

Remember you are not going to have a 100% success rate with this!  In fact, if you average anywhere above a 30-40% response rate consider it a success!

But just one of these big influencers that we identified can send you hundreds of new visitors (and potential subscribers!) with just a single mention.  Not to mention the possible business relationship that can come from knowing these influencers!

Want to increase your response rates?

If you give (by sharing, re-tweeting, etc) before you try and get (them to share your links) you will have a much higher response rate.  Get on their radar, comment on their blog posts, start-up conversations by email or on Twitter.

If you set aside a little time every day to devote to networking with top influencers then before long you won’t even have to ask them to share your content, they will start doing it themselves!

So there you have it, a complete step-by-step guide on how to identify the top influencers in your niche, connect with them and send your content viral!

This may seem like a ton of work, but if you set aside 30 minutes a day devoted entirely to this your traffic will start skyrocketing. I did exactly the same for my own blog which helped it to grow at a rapid pace.

Now get out there and start networking!

Have you tried this yourself?  Know of a better way to find influencers?  Leave a comment, would love to hear about it!