This is the 36th income report as part of the zero backlink experiment.

What I Have Done In September

Now that I finally have full time internet access again, I spent a lot of last month and this month catching up on all of the things I had let slip which included everything from creating new split tests to boring things like accounting.

When I wasn’t fighting fires I have invested most of my time trying to finish off my first premium course. The actual course is finished it’s now just a case of tieing up things like technical integration and sales pages.

Having never launched a product properly before, there has been a steep learning curve!

As I have not spent much time on the blog, I’m not 100% sure what income is going to look like this month. Normally I have a rough idea at this point but right now as I write this I’m clueless.

So let’s take a closer look at what I’ve done this month on the blog specifically.

As I slowly reduce the amount of posts that go out each month on the blog, this month remained consistent with last month by publishing a total of 5 posts.

We started with how to drive traffic to your blog that is easy for anyone to implement.

Then we built on that with these growth hacking techniques to take advantage of Reddit, Twitter & Google+ for easy targeted traffic.

Other than those we just had the regular income report roundup post and after a few months away we also saw the return of the best of internet marketing this month.

Earlier in the month I deployed a new experiment on the blog to start collecting data for an all new case study as part of a sponsored post for InfoLinks.

Unfortunately it turns out if you want any chance of making money with them, you have to quite literally let them take over the site-

Honestly it completely destroyed any form of user experience, it was awful.

The system ran for less than 24 hours generating 3,606 page views and 7,104 ad views which are no small numbers.

So how much money did completely destroying my user experience get me?

A staggering $0.87 – which isn’t even enough to buy a beer to relax with after spending a bunch of time dealing with complaints… and a beer only costs $1 here!

So I would like to apologize to all the readers that I inconvenienced over those 24 hours that InfoLinks was live.

But that is the beauty of internet marketing sometimes – you’ve got to be constantly experimenting, failing and growing. I expect to do that a bunch more in the near future :)

Increased Conversions With This Free Plugin

On the flip side I did have an experiment that went very very very well.

I don’t want to go into too much detail here as I’ve got a freaking awesome case study coming for you next week with all the juicy details.

It’s taken a couple of split tests but that is a huge increase in conversion from a measly 1.12% to 6.38% and unlike Infolinks, it didn’t generate a single complaint!

I’ll have a much more detailed post about this for you next week including all of the split tests I ran, but in the mean time I highly recommend you spend the next 15 minutes setting up your own welcome mat.

While I’ve been catching up on tasks I had let a couple of new exclusive reader deals slip through the net and sit dormant in my task lisk.

So this month I pulled my socks up and added some new exclusive internet marketing deals that you can’t find anywhere else.

There are deals for LongTailPro, Content Marketer, GSA Captcha Breaker & many more!

If you have a good product and would like to be featured in the deals section please get in touch.

While I was back in the UK in May I picked up a couple of new Western Digital Red 4TB drives for storage.

Luckily I have all of my important data backed up so it was no biggie, but it could have been a critical mass meltdown if I didn’t. Chkdsk couldn’t access the drive either nor any specialist recovery software.

And this is a brand new hard disk drive that was only 5 months old! Always assume your hard disks are going to fail.

So I wanted to give everyone a gentle reminder to make sure you have all of your important documents, files and websites backed up!

It’s as simple as getting a free DropBox or Onedrive account and installing some software on your computer and a free plugin on your website.

So let’s get our hands dirty and take a look at what my lack of attention to the blog has done to the important metrics.

Even so it is still quite far off my current goal to build stable traffic at 60,000 visitors per month.

I have a couple of posts coming up this month that should help me reach that goal though so stay tuned :)

The 3 killer growth hacks tutorial stole the show this month with a significant lead over the simple traffic generation methods.

Close behind was the how to make money with Fiverr tutorial. It’s always great to see older content jump into the top spots sometimes! 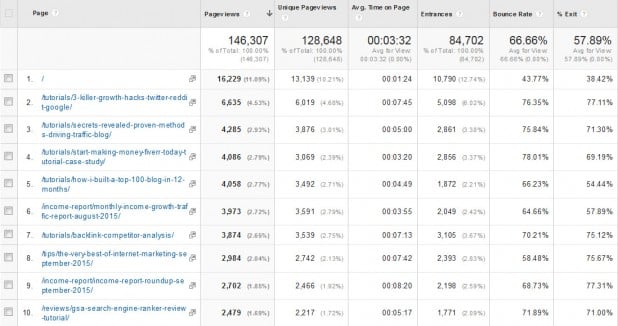 Not much has changed in terms of the top traffic sources this month.

With views taking a hit so did total minutes watched from 111,497 to 103,086 which still works out at that at least 2 people are watching my videos every second of every day.

I have this section of the income report disabled for the past 7 or 8 months but have finally managed to find a reliable source for the data.

I’m using this free plugin to collect that data which also breaks down shares by post as well.

This month brought 2,251 new subscribers which is roughly in line with last months 2,328.

There are now a total of 121,833 subscribers across all of the various channels!

Well last month was a fall from grace after seeing the biggest earning month in the blogs history from $35,209 to $23,470.

I was worried that drops was going to continue this month but it’s good to see it has stabilised at $24,209 this month which is a $739 increase on last month.

Half A Million Dollar Blog

That also means that the blog has officially crossed the $500,000 mark in total earnings since it was launched in August 2012.

When I launched this blog as an experiment I never thought it would reach half a million dollars!

I would love to eventually take this blog cross the 7 figure mark and if it’s taken 38 months to hit the half way point then it’s time to step my game up and make the other half in 12 months.

An ambitious goal but more than achievable with significant elbow grease and left handed screw drivers!

In the coming month I have some extra juicy content for you including an awesome case study to increase conversion that anyone can apply and revealing a sneaky but powerful authoritative backlink source from Russian newspapers!

In the mean time I am 100% focused on finishing and launching my first premium training course. All that is left to do is to script, record and build 4 sales pages and a few technical bits.