This is the 32nd income report as part of the zero backlink experiment.

What I Have Done In May

I’ve been travelling since the 1st of April but finally returned home on the 23rd of May. In May alone I hit the UK, Amsterdam, Bucharest (Romania), Lanzarote (Spain) & Rhodes (Greece).

That means the last week of this month since returning home has been nothing but wall to wall catching up on work and getting back on track.

On top of that I’ve spent the last week looking for a new house as the contract of my current house expires today, the 1st! Which means I’m moving house and writing this report simultaneously.

But with all that said I still managed to get quite a lot done as you’ll see below – how that has affected income though is anyone’s guess at this point.

This month I published a total of 7 posts which is just 1 less than last month, I’m going to reduce this frequency to 1 per week soon to measure how that impacts things.

We started the month by looking at how to clean up your link profile with a backlink audit.

One of the blogs readers shared their Fiverr success story after following one of the tutorials on the blog to make money on Fiverr.

You also learnt how to use PandaBot to fake usage metrics & rank your sites without building any links.

After revealing an awesome local SEO guide a couple of months ago I invited 20 local SEO experts to share their #1 tip.

Other than those posts we just had the regular income report roundup post but this month I also managed to publish the very best of internet marketing.

OptinMonster has been absolutely critical in the growth of this blog for a long time (read my full Optinmonster review).

But it did have it’s problems – for example post specific targeting was a huge strain on the plugin which is how I used it to display the SEO lead magnet on SEO posts for example.

The problem is I also have a pretty big forum so the plugin would fall over trying to import all of the possible forums posts, topics, replies, blog posts, blog pages & other custom post types I have.

I also found other limitations like the split testing although was very good – was also limiting at the same time if you wanted to go deeper. I had also grown to need the ability to target by tag which it couldn’t do.

The final nail in the coffin was while doing my reports last month I noticed a huge drop in conversion rate. When I dug deeper I saw that Optinmonster had lost all of my page specific targeting settings.

That means, for whatever reason – that none of my lead magnets were getting displayed at all for a few weeks. So while it had been very good to me, it was time to move on.

At some point in the past few months I received a pitch about Thrive Leads. Which I ignored initially – but looking deeper and speaking with the owner initially, it was the perfect fit.

It does all of the things Optinmonster couldn’t do and is much more advanced in how you can integrate, target and test.

For example you can test a combination of forms types against each other, with different targeting, designs and triggers to find the optimal combination.

Below I’m testing an exit popup for all posts tagged SEO with different triggers – a welcome trigger, an exit trigger and when someone scrolls to 40% of the page.

Right now I have only set up the very basics and just rushed through everything to at least get to a point where the lead magnets are triggering on the right posts/pages.

I still need to spend some time with the plugin to improve on the setup and setup more split tests, but overall Thrive Leads is an absolutely fantastic plugin.

Preparing To Migrate To Infusionsoft

I have decided that it’s time to move all of my business activity into a more robust system like Infusionsoft.

Over the past 6 weeks I have been slowly learning the ropes of the new system and getting things setup – eventually I will move everything over including this blog.

This does mean I will be moving email marketing away from Aweber and into the much more robust Infusionsoft platform which will track all my traffic, optins, email marketing funnels, payment processing & more all under one roof. 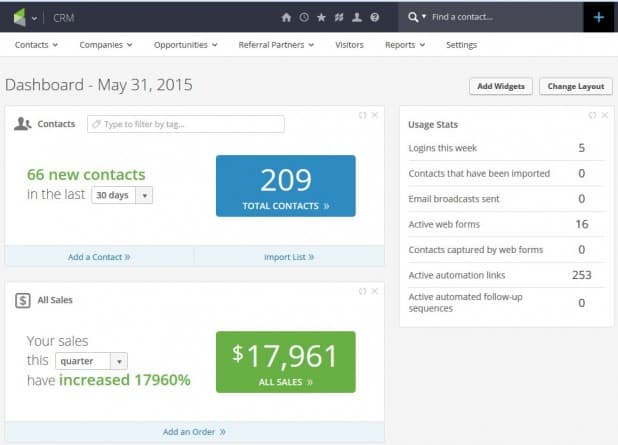 As you can see above I have already moved one of my web businesses over to the system as I learn the ropes but eventually this will be behind every site I own.

Infusionsoft is an insanely powerful marketing tool and the fact that it does CRM, Marketing, Ecommerce & Payment Processing all under one roof makes it an absolute beast.

Unlike Aweber that is listed based, Infusionsoft works on a tag and action based system. You can use tags to trigger anything.

Honestly once you wrap your head around the tag based system – there is no limit to what you can do. The campaign builder is particularly awesome-

It also integrates with so many different things, so let’s say I’m selling a digital product at $147 and the pro version at $297. I could have a tag automatically trigger an order to drop ship a custom T-Shirt, beer hat or whatever you want to anyone that buys the pro version.

Heck I can even have it automatically send Birthday Cards out with exclusive discounts or hand written letters thanking people for their order on complete auto pilot.

As an affiliate I often get email notifications telling me I made a sale, well now I can parse that email into Infusionsoft and add a tag to that persons contact record so I know they bought a copy of GSA Search Engine Ranker & how much they paid. That could then trigger an ascension series to get them to buy GSA Captcha Breaker.

Oh and because InfusionSoft also tracks all activity across your websites with tracking code, things can get really interesting – eg if someone drops out of a funnel you could add a tag that triggers a campaign (email, hand written letter, text message, cuddly teddy bear) to bring them back into sales funnel.

So once I’m comfortable with all the nuts and bolts – I’ll be moving all of my online businesses over to Infusionsoft one at a time, including this blog :)

Spoke At GPeC Summit In Bucharest

Towards the start of May I flew into Bucharest for less than 12 hours to sleep at the hotel and then deliver a keynote at the GPeC Summit in Romania.

It was a pretty big crowd but as soon as I had finished with the talk I had to immediately pack up and go, jump in the car and catch my flight home – it was tight! 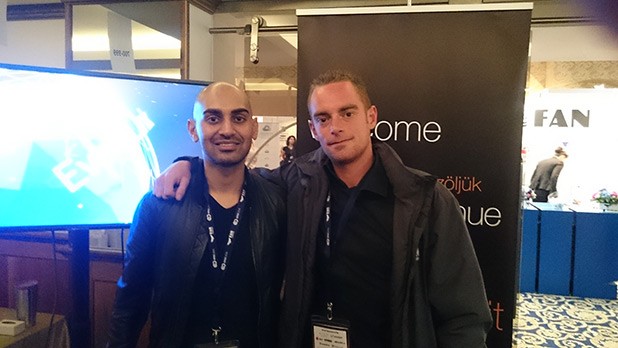 I also managed to grab some time with Neil Patel who was also speaking at the event, although I didn’t recognize him without the hair at first! But everyone else did and he was getting hounded constantly.

Spoke At UnGagged (BHW) In London

In the middle of the month I headed to London to speak at UnGagged (BlackHatWorld) conference. 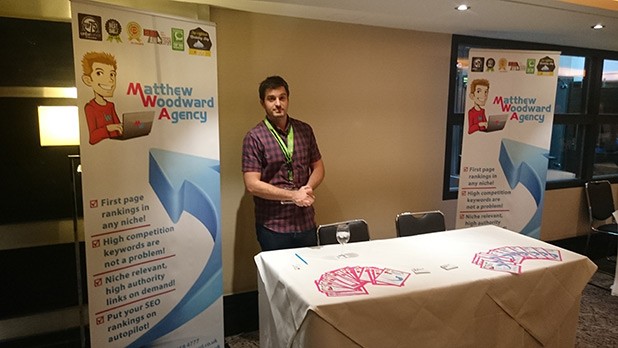 It was quite nerve wracking to get it all arranged in a short space of time and something we had never done before.

However all went smoothly and it sparked some interesting conversations over the event, only time will tell if those conversations turn into profit.

And I Even Managed To…

Returned to Weymouth, UK to catch up with family and relive some child hood memories- 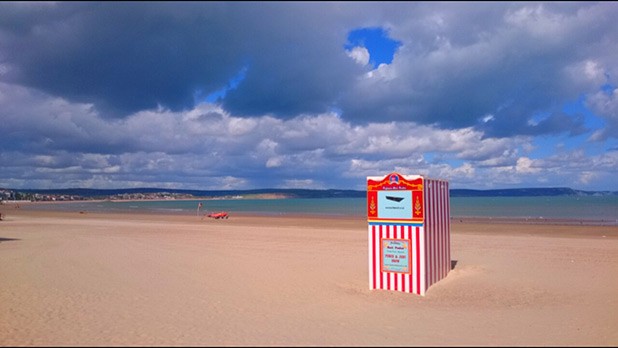 And sneaked off to Rhodes, Greece to take an #AcropolisSelfie

Posted by MatthewWoodward.co.uk on Saturday, May 2, 2015

Now that I think about it, May was absolutely crazy month I have no idea how I managed to do all of that.

I’m certainly paying the price since returning home though and have quickly forgot what ‘outside’ looks like as I catch up.

But what has all of that done for income this month?

I would like to build this to be a consistent 60,000 per month in the next few months. 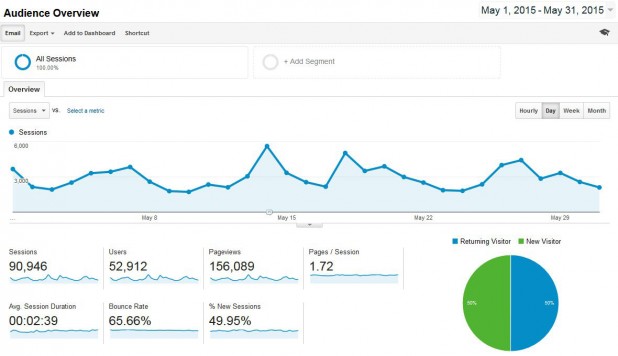 This month the ranking your website with fake usage metrics was the most dominant piece of content.

That was followed closely by the local SEO experts roundup with the Google Analytics SEO hacks tutorial also securing a top spot.

Not much has changed in terms of traffic sources this time around. Google and returning visitors are still a huge driving factor.

The rest of the traffic is coming from a mix of social, forums and other referrals which I’m happy with.

Although if things go to plan social traffic should grow this coming month or two. 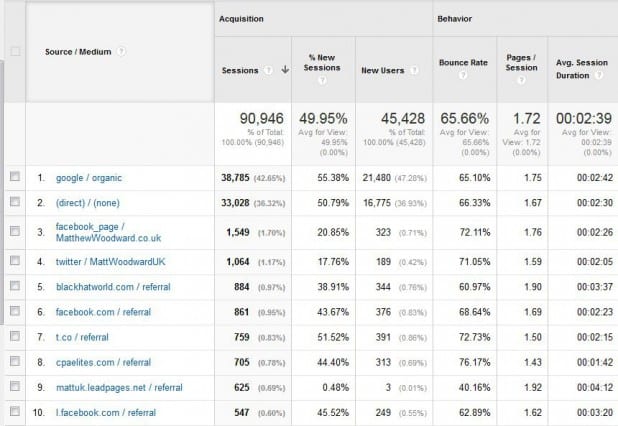 YouTube views have broken the 20k barrier this month at 20,043 which is a slight increase from last months 19,816. 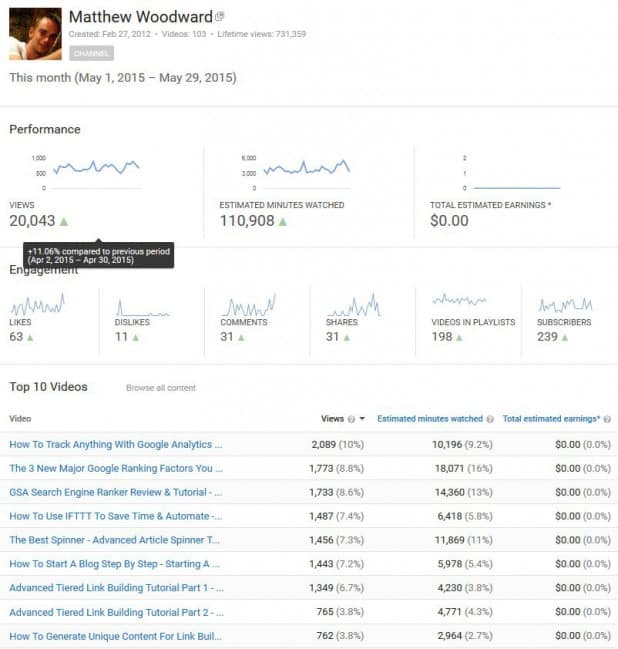 This month brought 2,417 new subscribers which is similar to last months 2,281 but a big drop on the month before.

Now that I have fixed the problems with Optinmonster and replaced it with Thrive Leads this should grow substantially next month.

There are now a total of 111,636 subscribers across all of the various channels!

While I’ve spent the last 2 months working on the road while juggling a crazy travel and conference schedule, I did feel like things were getting on top of me.

I’m happy to be back home and in the driving seat again, although the second after I publish this I’m going to shut down my computer and start loading the car to move house.

I have also decided that for the rest of the year I won’t be doing any more travelling and instead staying focused on the business and my own personal development.

While the dotcom lifestyle gives you freedom of time and location, it’s good to be grounded for a while.

The next 6 months are going to be very interesting indeed and I believe they will be the biggest 6 months I have ever had – hold on with both hands :)