This is the 54th income report as part of the zero backlink experiment.

What I Have Done In March

March has been a successful month on a nubmer of fronts.

But looking back it doesn’t feel like I achieved all that much as most of my effort went into moving everything over to Drip.

With that said the blog is now running on the perfect foundation for future growth – it’s just up to me to leverage that now.

Last week I launched a giveaway to win 1 of 3 SERPed Ultimate Accounts wroth $2,148 each.

The giveaway closes in less than 24 hours – so claim your entry now!

I’ll be completing the draw and handing out the prizes later this week.

For those of you that haven’t heard of SERPed, I highly suggest you watch this short video-

Impressed? You should be!

So claim your entry now!

After a month of preparation I finally completed they migration to Drip.

During the process I was able to streamline a lot of things and bring things under one roof. For example I was previously using forms from Aweber, Leadpages and Thrive Leads.

Now everything is delivered by Thrive Leads which makes management and split testing of all the forms across the blog a lot easier.

You should check out my previous income reports to see exactly why Drip is so awesome.

I officially made the switch 2 weeks ago across 2 days.

Day 1 was to migrate all forms and entry points to my email list to Drip, while day 2 was focused on migrating all existing subscribers from Aweber.

Everything went smoothly and I’ve already sent a number of broadcasts and drip feed campaigns, some of you may have noticed the slight change in email formatting.

One of the things I love about Drip was the website tracking feature.

It’s possible to track exactly which pages people visit on your site and then use that data to trigger email campaigns.

The first experimental campaign I setup with Drip was to drive more people towards the exclusive 14 day SEM-Rush trial I have setup.

This is how it works- 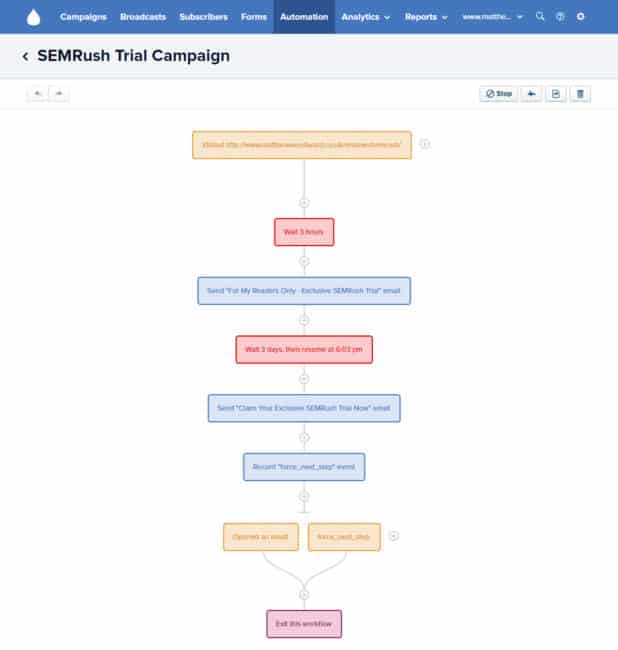 So far only a handful of people have triggered the campaigns email so I will be watching closely over the coming weeks.

This campaign works on the same premise by triggering emails to people that read my guide to get started with blogging.

Except this time instead of promoting a free trial, it’s promoting the affiliate sale directly.

So once people read the guide, 3 hours later they get this email-

And then if they don’t open it, it’s gets resent automatically a few days later with a different subject line.

These 2 campaigns are really just scratching the surface of what can be done with Drip.

I’ll be overhauling my entire email marketing strategy in the near future to accommodate the new abilities that Drip brings to the table.

One of the other little features that I love with Drip is the automatic resending of broadcasts to people that don’t open them.

I have already used this on 2 broadcasts and it works really well.

Take a look at the stats from this re-send which saw an extra 7.3% people open the email and an extra 893 clicks- 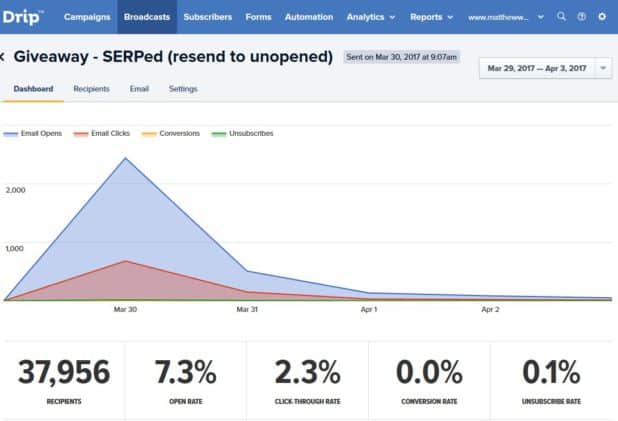 And all of that happens automatically!

During the migration process I also took time to clean my email lists up.

I was pretty ruthless with the cut and deleted anyone that hadn’t opened an email from me in the past 6 months.

Now deleting that many people was kind of scary, because it’s taken me a long time to build that number – but in the end it is quality that counts more than anything else!

So all in all, I highly recommend Drip – it really is the future of email marketing!

With my focus on migrating to Drip contention was limited to 4 posts this month including last months income report.

We started out with 22 TED talks for digital marketers which in my opinion is a great post,m but the stats are telling me otherwise.

That was followed with the SERPed giveaway, updated review and video tutorial.

Last but not least I updated this sneaky post to help you increase traffic and links from people that copy and paste your content.

So let’s get our hands dirty and see how the blog has actually performed this month.

By far the most popular post this month was the updated SERPed review and giveaway.

That was closely followed by the Web 2.0 PBN tutorial along with this how to make money on Fiverr guide.

Not much has changed in traffic sources with a good mix of traffic coming from Google organic and social sources. 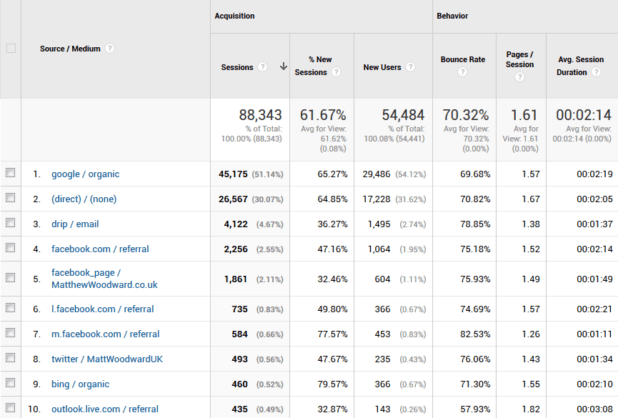 Google are making lots of updates at the moment so I’m waiting for the dust to settle before taking a closer look at things.

That also had an impact on total minutes watched which increase from 75,755 to 93,165 respectively.

This month the total social shares across Facebook and Google+ increased from 75,816 to 77,484.

This month I deleted 42,918 people from my email list so the overall subscriber count is going to take a huge hit this month.

There are now a total of 116,158 subscribers across all of the various channels compared to last months 157,879!

Overall it has been a great month to close out the quarter.

Now that the Drip migration has taken place, I can focus on the next big project which is to publish the 4th update to my SEO course.

I’m also going to be preparing to re-launch it in the next couple of months so get on the waiting list now.

I have also prepared a lot of new content for the month so watch this space as some of the new posts are going to blow your mind!