This is the twelfth income report as part of the zero backlink experiment.

Every month I will be publish a post like this one that shows you how this blog is progressing and everything I have done across the month to get it there.

What I Have Done In July

July has been a relevantly slow month for the blog, just not had the time to push it like I had planned.

The blog has seen some nice coverage from around the web this month. Starting off with Hywel Curtis looking at the importance of been personal.

Long-time reader Charles Floate also named me in his top 50 internet marketing blogs. I have an awesome guest post from him to publish next month, the first in this blogs history!

I also picked up mentions on CrazyEgg, TriggerIM (not sure I deserve to be amongst those names though) & Aleksey Zuravlov but I’m guessing he missed this post.

Big props to Terry Kyle for the multiple mentions in his weekly email series! If you haven’t signed up yet make sure you do, he sends out great tips week in week out! One of those rare emails you actually want to open!

I also partnered up with Ehsan who featured my video to his audience in exchange for me answering all of his readers questions personally.

Kind of a ‘host an expert’ type setup. If you want to do something similar, contact me!

Technorati is one of the biggest blog search engines in the world. It tracks millions of blogs and billions of links on a daily basis rankings blogs in order of influence across a range of categories.

This blog has just picked up 2 Technorati awards-

Odd to think I run one of the top 100 business blogs in the world :S

I’ve spent a lot of time trying to build my personal brand and one of the things I’m trying to do is dominate the first page of search results for my name.

Last month I optimised my Google+ publisher page with some extra content and links.

Look what happens when you Google my name now!

Actually that was a couple of weeks ago, I just liked my temporary start button hack ^^ But if you Google it now it looks even better :)

Let me know how it looks from other Google search engines outside of the UK!

Just need to get rid of those other pesky results now :P

A few readers have asked me how the blog has done with all of the recent Google updates. Don’t forget this blog uses a zero link building strategy!

We’ve seen a new revision of Penguin, Panda, a rolling Panda update, the payday loans crackdown and a bunch of other tweaks in recent times.

I was previously using this plugin to drive social shares in exchange for exclusive resources and video downloads.

But it was causing me problems because it wasn’t compatible with caching systems meaning each post that used it had to be manually excluded from the cache which caused all sorts of issues.

I also wanted to expand it with LinkedIn and after many failed attempts at getting someone to improve the plugin on Odesk I found a replacement.

The OnePress Social Locker works with caching systems out of the box and supports more social networks.

I only made the switch a couple of days ago but you can see it in action at the end of this post.

Last month I tested LeadPlayer on 3 videos to see if it would increase conversion. The small test on 3 videos drove 64 new subscribers in 28 days compared to the old setup that took a few months to bring 111 subscribers.

In just 1 month it brought 195 new subscribers which is a huge boost when you consider it took me a few months to get 111 with the old video player.

Since deploying the test/full rollout of LeadPlayer on the 28th of May it has brought an extra 300 subscribers and 420 affiliate link clicks to the blog.

Money well spent I’d say! Learn how I set it up in last month’s income report.

Last month I also added the Q2W3 fixed widget plugin to the sidebar. That’s the red box you see on the right hand side :)

When I reported its performance last month I hadn’t reset all of the stats for the other opt in boxes in Aweber, so I did that at the start of July. 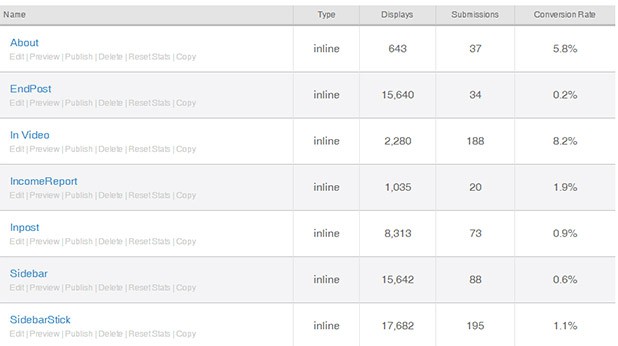 As you can see the SidebarStick form is converting a 1.1% which is pretty good! Take a look at my Aweber review to learn more about how I am using it.

I think it’s going to be sticking around – get it! no? I’ll get my coat.

Turns out my cat is a massive whore and got knocked up!

I only found out a couple of weeks ago and was meant to be going to Poland to meet Dave & Vicky from ACoupleTravelers.com which I had to cancel.

I could have gone in the end because she still hasn’t dropped them yet and was due in the last week of July. 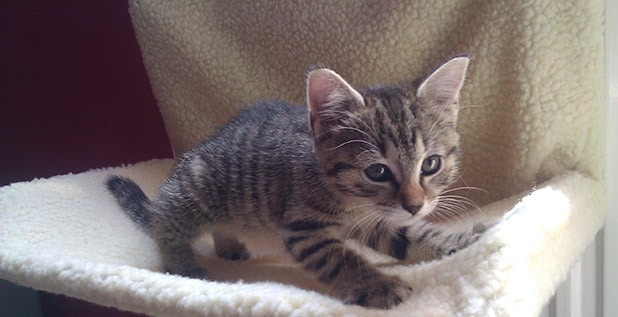 She used to be so cute, now she’s the biggest slut on the street! 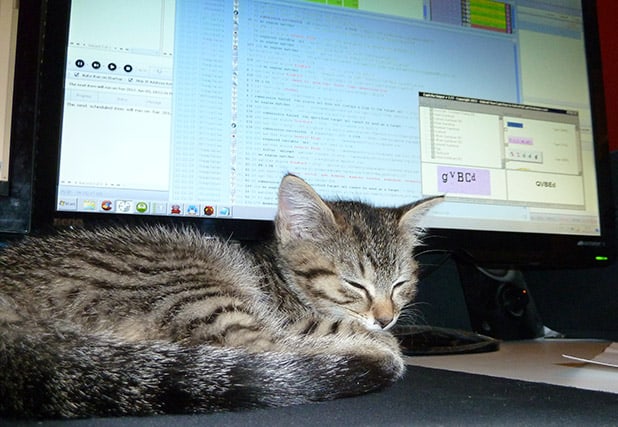 Loves that link building though!

Preparing For A Month On The Road

Most of this month is going to be spent on the road. I’m going to Prague for a week and to the Brutal Assault festival in Josefov and will hopefully catch up with the ACoupleTravelers.com team.

Then I’m shooting back over to Costa Rica for nearly 3 weeks to catch up with Yeison & Andrea!

I’m trying my hardest to prepare as much content as possible in advance so I can take as much time off as possible and actually relax on holiday instead of taking my work with me.

While it’s great travelling and working you don’t get any time to ‘switch off’ – so I’m going to try and do that this time :)

I’m keen to explore the power of time off-

So far I’ve got a new competition, an awesome guest post from Charles Float and an interview from GODOVERYOU (cool people will know who he is :P) which is looking fantastic!

I only published 6 posts this month including last month’s income report. A bit slack for me!

I started out with how to track anything with Google Analytics and highlighted best TED talks for marketing.

I also pitched BlackHatWorld, TrafficPlanet & WarriorForum against each other in the ultimate forum showdown!

Let’s not forget the regular income report roundup (best month so far) & what I have read this month features.

Bounce rate continues to decrease on the blog and I’ll be working to reduce that further in the coming months ;)

Last month’s income report proved to be very popular – probably due to the little dig I was having at the WarriorForum :P

The how to start a blog tutorial is popular but I’m sure every web host affiliate program on the planet shaves us affiliates bald. 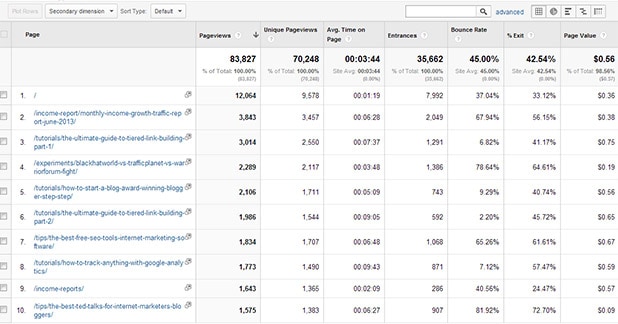 The top traffic sources pretty much remain unchanged from last month and have stayed at relatively stable levels.

Not sure how I referred myself though ^^

I’m going to try and spend some time tweaking things on site to grow that further at some point. 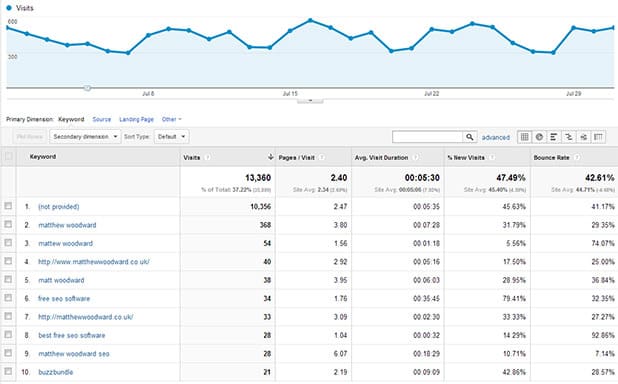 But have I done enough to reach my total minutes watched target of 87,658 minutes? This would mean that 2 people are watching my tutorials every minute of every day.

Now I want to increase that to 3 people every minute of every day which stands at 131,487 minutes =D 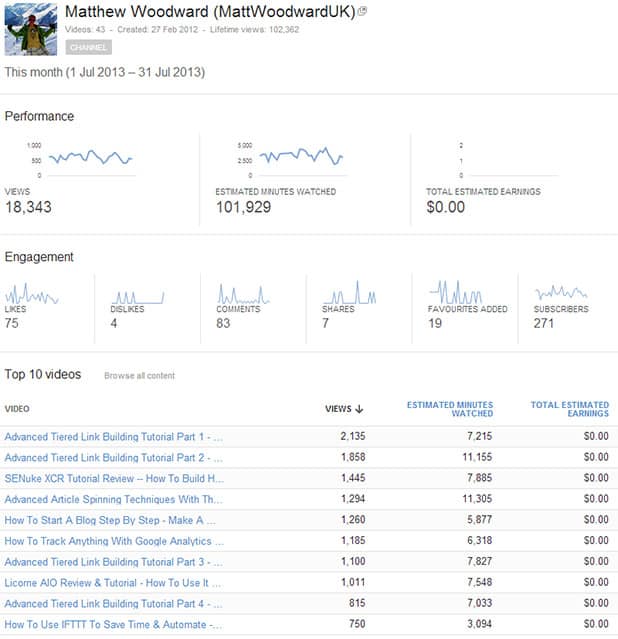 The blog has seen a total of 16,559 shares across Facebook, Twitter and Google+ this month compared to 15,409 last month.

The forum took some heavy hits from spammers this month but I’ve got it back under control now – sorry about that!

This month added 222 new users, 53 new topics and 189 replies this month which was similar to last month’s performance.

If you haven’t joined the forum yet, get involved!

I’ll personally answer any internet marketing questions you have!

Last month I managed to add a total of 1,259 new subscribers to the blog across the various channels.

This month that dropped to 962 which is still a fair whack at 31 per day.

There are now a total of 8,949 subscribers across all of the different channels.

I only made 135 posts in forums this month which is pretty slack – probably not going to be much better next month to be honest :P

Not banned from the WarriorForum anymore though!

I seem to have a habit of getting close to my $10,000 target and then letting the blog take a back seat while I focus on other sites / clients.

That’s probably not going to get much better next month as I plan to take as much time off as possible while I travel so I can actually ‘switch off’ from work while away.

Once I get back from Costa Rica in the middle of September it’s all hands on deck to get my free product launched, launch the building a site over my shoulder mega series, transform the blog with a bunch of upgrades, introduce a new method of delivering content and much more!

And that list doesn’t even include my biggest announcement ^^

Consider the next month the calm before the storm.

Subscribe now to get all of this & more delivered direct to your inbox!