This is the 28th income report as part of the zero backlink experiment.

What I Have Done In January

January was a very strange month as it happened across 4 countries which gave me plenty of time to reflect on the past year & future of my businesses.

This time of year is generally a quiet one in the internet world so it was the perfect time to put my thinking cap on for the year ahead.

I’m expecting that to have a big impact on the blog’s earnings this month but it certainly paves the way for some record breaking months to come.

I published a total of 7 posts this month which is 1 less than last month but it feels like I hardly posted at all!

We started the years by looking at the top 10 posts of 2014 based on 3.6 million pageviews!

Then 44 experts shared their link building strategies which was closely followed by tutorial to create your own expert roundups.

Next I showed you how I increased email optin conversion by 469% in less than 24 hours.

I soft launched my SEO agency to the wider public in June which has seen steady growth since as we found our feet.

We have focused on building custom SEO strategies around businesses needs, goals & budget which has seen great success so far in some very competitive niches. 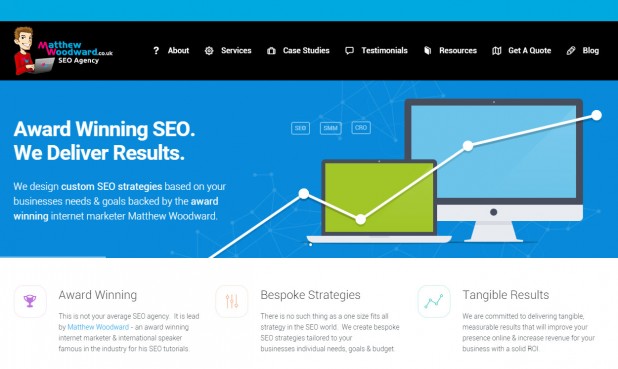 There are 14 active clients at the moment & we have spent the last couple of months working hard to build out our infrastructure for a full launch.

So with that said let me introduce my specialist SEO agency to you.

We specialise purely in ranking sites in search engines. Nothing more, nothing less. There are 5 core services-

If you want your SEO handled by a specialist team, let us know. Custom strategies start from $1,000 per month.

We can only manage so many clients at once so it’s first come, first serve.

I flew out to Vegas from Costa Rica to attend Affiliate Summit West 2015 at the Paris Hotel.

While I was there I was part of an hour long panel with John Chow, John Rampton & Zac Johnson talking about how we built successful blogs.

Thanks to Coralie for the photo below that got retweeted a bunch of times.

As always with Affiliate Summit they had some crazy partys & events on but I took an early exit and moved my flight forward a day to get back to focusing on this years goals. 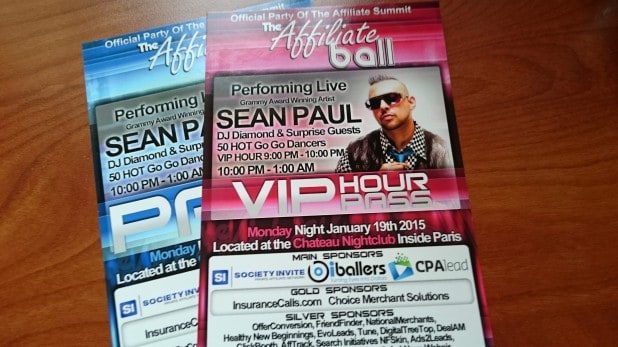 Planning For The Year Ahead

As I was travelling a lot in January I had plenty of time to think about everything in 2014 and plan forward for 2015.

I made a list for each of my core businesses and wrote down the goals I would like to achieve with them in 2015 and broke those into smaller quarter by quarter goals.

Then for all of the goals that needed to be achieved in Q1 2015 I broke down a list of tasks and assigned deadline dates against each of those tasks.

It sounds like a lot of work but it only took a couple of hours to put together and gives me a solid plan of action to work through & stay focused.

This includes some major changes for the blog that include some big changes in direction.

I’m not going to say more than that at the moment but it’s going to make for an exciting first 3 months of 2015.

The most popular post this month were these awesome link building tips closely followed by the how to start a blog and make money tutorial.

People are still paying close attention to the new Google ranking factors which I will have a follow up on soon. 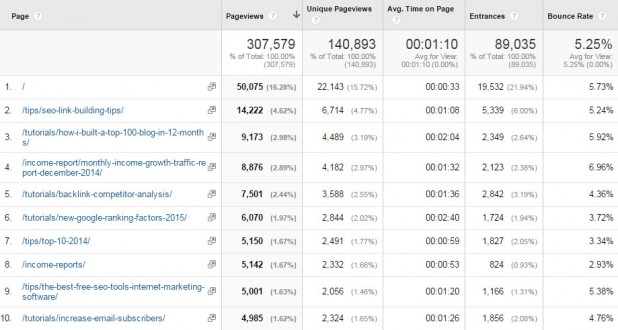 Last month I ran a bunch of Facebook campaigns but didn’t bother this month as I was taking some time off and I like to watch them closely.

Traffic is made up from a variety of sources with direct traffic & Google organic traffic remaining dominant. 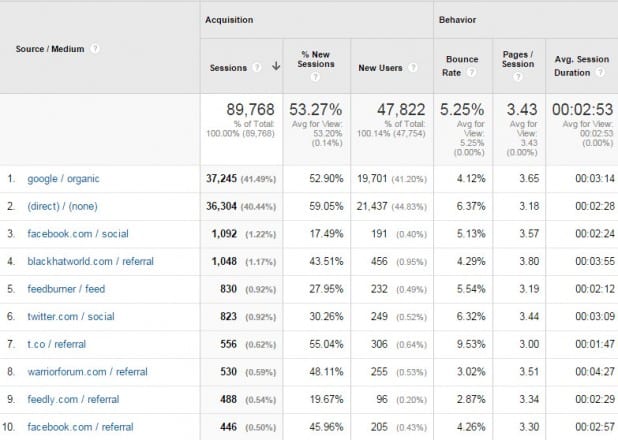 The top keywords we can actually see are dominated by brand and direct URL searches for my tutorials!

Last month YouTube exploded due to a certain video which has began to settle again this month.

Total minutes watched also took a knock from from 204,669 to 127,157! That still means there nearly 3 people were watching one of my videos every minute of every day! 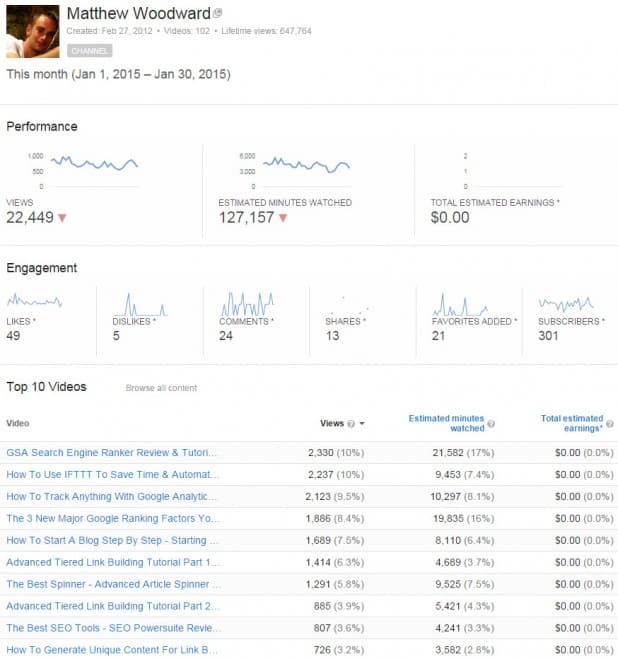 I’m pretty sure the numbers reflected below are not accurate. The plugin I use to collect these stats was pulled from sale over a year ago & I think it finally broke.

But either way here are the numbers it is reporting at the moment – I’ll get it fixed up this month! If you know a good plugin to grab social share stats for every post let me know.

This month brought 3,441 new subscribers across various channels which is a bit of a drop off from last months 5,318.

I suspect this is because I removed a lot of links to my social channels to increase focus on optin conversion.

There are now a total of 97,589 subscribers across all of the different channels.

As I was writing the report today I was anticipating a big drop off in income, so I was surprised to see it remained steady!

January is always a pretty rough month for blogs but for one reason or another I managed to weather the storm as we move into 2015.

Hopefully that provides a stable foundation to build on.

With all of the relaxing out of the way it’s time to fix up and kick 2015 off with a bang.

Over the next couple of weeks I’m going to be moving into an office and deploying a brand new theme on the blog which isn’t actually brand new at all.

You’ll see what I mean soon :)

So with that said, it is Sunday and I worked all week as it is – it’s time to sign off.