This is the 27th income report as part of the zero backlink experiment.

What I Have Done In December

As we moved closer to the holiday season in December I began to wind down my work load in preparation for a couple of weeks off.

Behind the scenes I put a solid plan together for the blog in 2015 that will see a number of improvements across the board – including working less by bringing 3 staff on board next month.

Last month was a great month for earnings but this was because of a couple of unique events like the sun setting of my tutorials and Black Friday.

So with taking some time off combined with December usually being a slow month in the internet marketing world it will be interesting to see how that has affected things.

I published a total of 8 posts this month which is 1 more than last month even though I worked less – weird.

We kicked off with a roundup of Cyber Monday deals.

Then I took a close look at Bing SEO and let’s not forget all of the Google ranking factors as well!

I also revealed the 3 new Google ranking factors that you must be paying attention to in 2015.

You also learnt how to find influencers for your own gains.

The Best Laptop On The Planet

I was lucky enough for a Dell Brand Ambassador to get in touch with me and offer me the brand new Alienware 13 laptop.

It arrived a few days ago and let me tell you this thing is an absolute beast!

I was worried it wouldn’t be as portable as my current laptop but it weighs the same and is even a bit smaller – but with 4 times the power!

Thank you to Alvina Torres for sorting that out – she can also hook up some awesome discounts!

Not so long ago Stuart Walker offered some great advice which I instantly implemented across the blog.

As part of that I had to create a range of lead magnets and content upgrades to offer across the blog.

This month I decided to take that a step further by combining those with $2,000 worth of Facebook Ads to grow the blogs readership on auto pilot.

You can see one of the campaigns I ran above which did a great job at bringing targeted traffic to the blog.

I’ve been experimenting throughout December so I will roll out a solid campaign for January soon. Here is a sneak peak at some of the split test results-

I will be sharing all my Facebook learnings over the coming months don’t worry :)

Write For The Blog

I also introduced a page inviting people to write for the blog.

I spent a lot of time thinking about that before introducing it and put together a very strict set of guidelines for anyone that wants to publish here.

I am hoping that by inviting others to publish on the blog you guys will benefit from having a range of experts in their respected fields sharing their best bits.

That way you are not only limited to my knowledge – for example I get a lot of questions about Local SEO and that’s not something I have experience with.

I’m going to be keeping a close eye on this though but the few applications I have received so far are looking fantastic!

I launched the blog over 2 years ago and since then not a lot has changed with the theme & layout.

On top of that the theme I use isn’t coded all that well and certainly doesn’t live up to modern standards.

Combine that with the amount of complaints I get about how bad the site is on mobile and the fact that Google prioritize mobile sites in mobile search – it was time to take action.

So I have decided to keep things simple. The design is not going to change at all – you won’t even know the new theme is live when it is live.

What will be different though is it will be coded to modern standards with responsive HTML5 & CSS3. It will also be much quicker and have full Schema integration baked in along with Visual Composer support.

The guys at MyThemeShop.com are working on it as we speak!

This month though that has leap frogged to 60,634 (1,956/day) this month which is largely due to the investment in Facebook advertising.

As long as it stays above 50,000 consistently though I will be a happy bunny.

Traffic sources are mostly dominated from the various Facebook ad campaigns I ran throughout the month.

The only difference is I can turn up/down the volume of traffic with Facebook on demand. 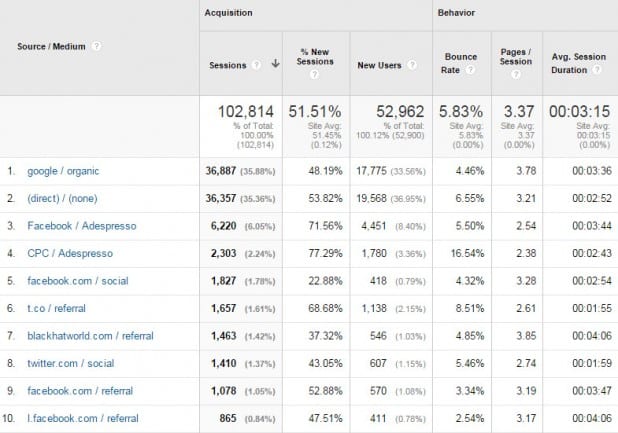 The top keywords we can actually see are dominated by brand and direct URL searches!

That also had a knock on effect on total minutes watched which shot from 100,718 to 204,669! That means there were 4.6 people watching every minute of every day!

All of that jump is down to this single post. 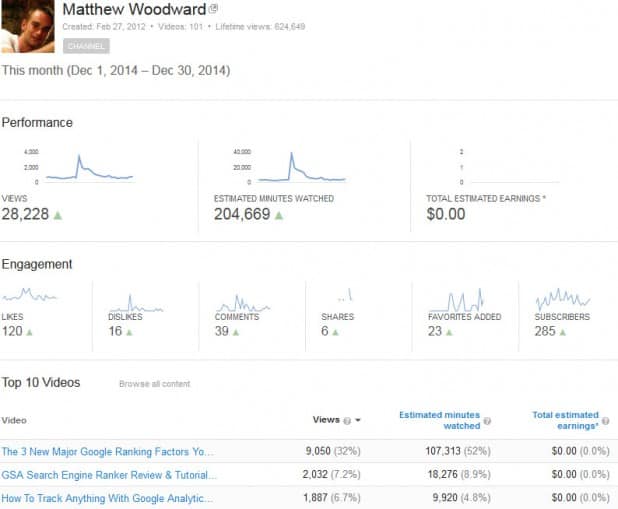 The blog has seen a total of 60,206 shares across Facebook, Twitter and Google+ this month compared to 57,189 last month.

This month brought 5,318 new subscribers across various channels which is a bit of a drop off from last months 7,637.

There are now a total of 94,178 subscribers across all of the different channels.

After an incredible month last month I was expecting to see a huge drop off in December.

Luckily though that still fell over the $20k barrier which is an income level I would like to maintain month on month along with 50,000 unique visitors.

Normally this is where I write something interesting about next month or wrapping things up – but it’s New Years day and I’m really hung over.